Home>Blog>News>Richard Cordray is Here to Protect You
­

Richard Cordray is Here to Protect You 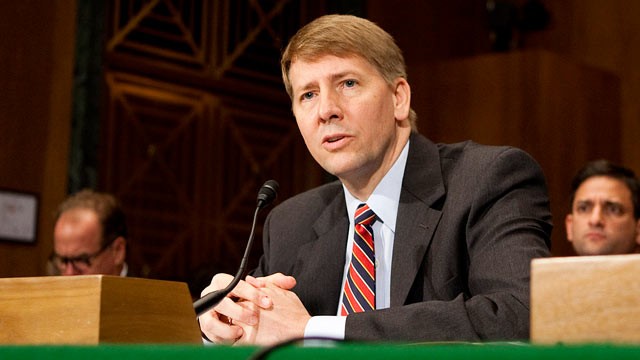 In early January 2012, President Obama made the recess appointment of Richard Cordray as the head of the recently-formed Consumer Financial Protection Bureau (CFPB). The Bureau was formed in response to the almost-predatory practices of banks leading up to the financial crisis. The point of the bureau is to enforce consumer protections and uphold laws that require banks and other financial services companies to stop taking advantage of consumers.

The CFPB has been operating for quite some time, but without a head. The director of the agency has been blocked by members of Congress, but with a recess, the appointment was made. But what does it mean for consumers — and banks — that Richard Cordray is now in charge?

Even though many were disappointed that Elizabeth Warren wasn’t given the post, consumer groups are also fond of Cordray. As the Ohio Attorney General, Cordray went after big banks and Wall Street types. As the head of the CFPB, he is likely to create regulations designed to require financial institutions to make sure consumers understand the terms of their loans, as well as enforce the idea that consumers truly be able to afford the products and services they are using.

Additionally, Cordray has already announced that he will be regulating non-bank financial companies, including payday lenders. Consumers can expect to learn more about financial products and loans before they sign the dotted line, and they should have more avenues of complaint if they are taken advantage of.

Additionally, they may see limited fees, and there may even be caps on what some lenders can charge in terms of interest rates, making it easier to discharge these loans without paying such high charges. This is important for cash-strapped consumers who have a difficult time digging out of debt.

2) Banks about to See More Rules

Cordray’s strong anti-Wall Street rhetoric during his campaign in Ohio is an indication of what big banks can expect from Cordray. Now that the CFPB has a director, it can start writing banking rules. The recent announcement that new regulations for payday lenders and other non-bank financial services companies, is a good indication that the financial industry could see some changes.

During the subprime lending debacle, the banks hit hardest were the bigger banks — due to the fact they were the institutions actually making the loans. Few of the smaller regional and local banks, and credit unions, were caught in the web, since they didn’t make the same number of risky loans. As a result, big banks are more likely to feel the impact of new rules and regulations than the smaller banks and credit unions. Indeed, credit unions and small banks have shown a level of cooperation with the CFPB, while the bigger banks have lobbied to block the regulatory power of the agency.

3) Bottom Line for Consumer and Banks

While it might take some time, Richard Cordray has already proved himself motivated to protect consumers, and willing to take on the banks. As a result, it is quite likely that consumers will soon have more options available to them for redress, as well as more information. Additionally, banks and even non-bank financial companies are likely to bear more responsibility for ensuring that the consumers who borrow can actually afford their products and services.

What do you think? Is the CFPB something you feel will make a difference for consumers?