How to Know If Your Bank is Maximizing Overdraft Fees 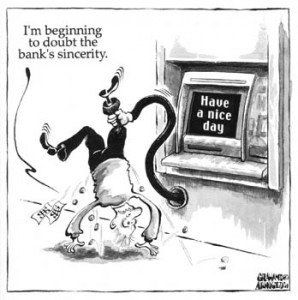 One of the most frustrating things in life is being charged overdraft fees. While the best defense against overdraft fees is to carefully monitor your spending, sometimes even our best efforts fall short. You might miscalculate, or forget about an earlier expense, and come up lacking. The situation is compounded, though, when banks purposely engage in practices that maximize the overdraft fees you are charged.

The Order Your Transactions are Processed Matters

It seems only logical that your transactions should be processed in chronological order. However, not all banks do this. The Pew Charitable Trusts estimates that 60% of transactions are re-ordered so that the highest transactions go first. This means that there is a chance that your bank is changing the order, during the daily processes, of your transactions.

Let’s say you stop and get $40 in gas for your car. Then you go pick up breakfast for $7. You stop to mail a small package for $3.50. Finally, you purchase new shoes for $80. Let’s say, though, that you only started the day with $70. If the transactions are processed in the order that you made them, your first transactions add up to $50.50. You don’t trigger an overdraft fee until you buy the shoes for $80.

On the other hand, if the transactions are re-ordered, the story changes. The $80 comes out first, meaning that you are already $10 in the hole. Next, the other transactions go through. Instead of having just one overdraft fee, you now have four overdraft fees. If your bank charges $35 per overdrawn transaction, that is the difference between $35 in fees and $140 in fees.

To add insult to injury, sometimes the day’s transactions are processed so that debits are taken out before credits. So, if you had stopped at the bank first in the morning, and deposited $100, you think you are covered. You might have thought that, thanks to your $100 deposit, you had $170 available to you. But, if your bank is one that takes the debits out first, your $100 deposit only kicks in at the end, after all the fees are charged.

You can’t even count on your online activity to help you keep an accurate picture. The transactions will show up in order throughout the day, but it can all change when the daily processing time arrives, usually sometime between 3 p.m. and 6 p.m. local time. That’s when many transactions are re-ordered and you suddenly end up hit with fees.

Is Your Bank Maximizing Overdraft Fees?

Many banks, due to consumer groups’ outcries, warnings by the FDIC, and a recent promise by the CFPB’s Richard Cordray to look into overdraft practices, are re-considering how they do things. There are two main ways you can determine whether or not your bank is participating in these maximizing behaviors:

1. Check your online account: Watch your account. Make a note of how the transactions are ordered as you make them. Then, check back the next day, after everything’s been made ‘official.’ If the transactions have been re-ordered, your bank is maximizing overdraft fees.

2. Ask the bank: Call your bank and ask how they order their transactions. Ask whether it’s chronological, or whether they re-order them. Find out what order is used, and consider switching banks if they are maximizing.

There are a number of ways that banks charge fees, but this might be one of the sneakiest. Be aware of how your transactions are being processed, and the order your bank uses.